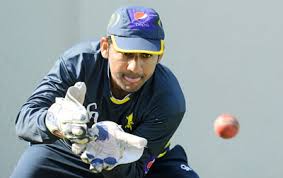 Kolkata, March 28 : Sarfraz Ahmed, the 28-year-old ‘keeper-batsman, stands the “best chance” of succeeding Shahid Afridi as Pakistan’s T20 captain., Indian media reported on Monday
Indian daily, ‘The Telegraph’ quoting PCB sources reported that Afridi won’t be retained even if he decides not to retire.After a poor World T20, Pakistan squad had returned home on Sunday (via Dubai).Afridi, also returned home after taking a break in the UAE for “personal reasons.” Besides the captaincy, the Pakistan Cricket Board (PCB) appears set to have a new coach and, possibly, a “reconstituted” selection committee.
Specifically, then, it could be the end of the road for coach Waqar Younis and chief selector Haroon Rashid.It’s a mystery why opener Khurram Manzoor was picked for the Asia Cup when he hadn’t played a single T20I before that tournament.Then, instead of pitching for variety, Rashid and his colleagues selected two left-arm spinners – Imad Wasim and Mohammed Nawaz – for the World T20. for many months. They lost the ODIs and T20Is to England in the UAE, the bottom line didn’t change in New Zealand, couldn’t Pakistan, in fact, haven’t been performing to potential make the Asia Cup final and, then, failed to get past the league stage of the World T20. The only mega success came in the Test series against England, in the UAE, which Pakistan won 2-0. Wins in the ODIs and T20Is in Zimbabwe wouldn’t really count for too much.There’s talk that many in Pakistan are keen on Tom Moody, who was Sri Lanka’s coach when they made the 2007 World Cup final.Some have also been mentioning Wasim Akram’s name, but it’s not clear whether he is himself keen on a full-time job. Pakistan’s next series, featuring all three formats, would only be July onwards. So, the PCB needn’t take all the big decisions immediately. But expect one or two heads to roll, sooner rather than later. That way, the PCB would be able to deflect some of the heat directed at it.