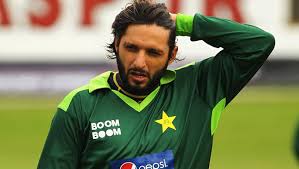 Pakistan head coach Waqar Younis on Monday criticised T20I captain Shahid Afridi’s ‘specific decisions’ in a report to be presented to an inquiry committee, according to reports.
Younis has prepared a report citing a number of reasons, including fitness of players as the main culprit behind team’s failure in the World T20. The report will be presented to an inquiry committee tomorrow.
In his report, Younis further states that the players were unable to execute the game plan during the World T20 where they lost three out of the four matches in Group 2.
The report also criticises T20I captain Shahid Afridi specific decisions during Pakistan’s loss to India, New Zealand and Australia. Moreover, the 44-year-old recommended that drastic measures need to be taken for the betterment of Pakistan cricket.
Pakistan team was able to bag only win in their World T20 campaign and that too against Bangladesh.
Earlier on Friday, Waqar lamented the decline of Pakistan cricket after his team were knocked out of the World Twenty20 with a disappointing 21-run defeat against Australia.
“We have just lost the match and whatever I say will look like an excuse,” Younis, 44, said at a post-match press conference. “If we think deeply we will see that Pakistan hasn’t seen any international cricket for last seven-eight years and that has hurt us. And that has started showing now.”
“Earlier we had match winners like Saeed Ajmal and Mohammad Hafeez who could bowl. Yes, I would say that Pakistan cricket is in a bit of a decline and we need to control it. We will have to look at our domestic cricket and infrastructure,” he added.