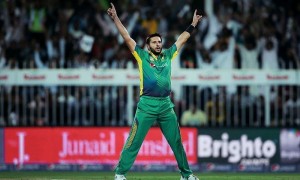 Pakistan’s T20 skipper Shahid Afridi on Wednesday hinted at reconsidering his decision to retire after the World T20 in India.Afridi, 35, said he is under “a lot of pressure” from family, friends and elders who believe “there is no need to retire from T20s”.“For a while now there is a lot of pressure from my family, a lot of pressure from my friends, including my elders, who say there is no need for me to retire from T20. That is a huge pressure. For now, in truth, I am focusing only on the World Cup. That is a huge challenge for me,” Afridi told ESPNcricinfo in a report published today. Afridi, along with Test captain Misbah-ul-Haq, retired from one-day internationals following Pakistan’s 2015 World Cup outing Down Under.
Misbah continue to lead Pakistan in Tests and Afridi in T20s. But the 35-year-old all-rounder had announced to quit all forms of international cricket after the World T20 in India.
“First I want to see where Pakistan stand in the World Cup. Whether I am capable of taking the team forward on the back of my performances. “I want to check where I am standing myself. As far as playing goes my fitness is zabardast (awesome). Energy is also there. I can play cricket. But I would be able to tell things clearly after the World Twenty20,” Afridi said.
Afridi, who has played 27 Tests, 398 ODIs and 90 Twenty20 internationals for Pakistan, said that he is under high pressure to continue playing cricket as “there is no real talent coming through Pakistan”. “There is a lot of pressure on me that I shouldn’t retire from T20. That I can play on, and as such there is no real talent coming through in Pakistan whose place I am taking,” Afridi was quoted as saying.Afridi has been a permanent member for Pakistan in the T20s and has played all the World T20 editions held so far.
In the Pakistan Super League (PSL), where he was the captain of the franchise Peshawar Zalmi, he ended up as the second highest wicket-taker for his team, with 10 wickets.-APP