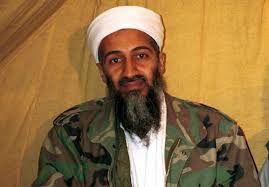 Osama bin Laden spent his final years engaged in a futile struggle to prevent his terror network from unraveling and embracing the brutal tactics that have since become signatures of the Islamic State, according to documents released Tuesday that were recovered from the compound where the al-Qaeda leader was killed in 2011.
In letters to subordinates, bin Laden denounced almost every aspect of the Islamic State playbook. He warned against seizing more territory than would be possible to hold, against prematurely declaring the restoration of the Islamic “caliphate,” and even against “publishing pictures of prisoners after they were beheaded.”
The admonishments were issued several years before al-
Qaeda’s affiliate in Iraq severed ties and rebranded itself the Islamic State. But the documents reveal the extent to which the ideological dispute behind that rupture was becoming in­trac­table even before bin Laden’s demise.
“The origins of the disagreement between al-Qaeda and [its Iraq wing] — all the guts are there,” said a senior U.S. intelligence official involved in reviewing the bin Laden letters and other materials that were declassified for Tuesday’s release.
Bin Laden was essentially warning subordinates that if they pursued the Islamic State model, “it will fail,” the official said, adding that he and other counterterrorism analysts are now “waiting to see if bin Laden was prescient.” The official spoke on the condition of anonymity, citing the sensitivity of the material.
Although the Islamic State has experienced significant setbacks in recent months, the organization has eclipsed al-Qaeda as the dominant brand of Islamist militancy in the years since bin Laden wrote those messages and has replaced the parent group as the most feared sponsor of terrorist attacks against Europe and the United States.
Bin Laden’s struggle to contain internal disputes over the terrorist group’s direction are traced in letters that are part of a broader collection of 112 documents released Tuesday by the Office of the Director of National Intelligence.
The files are the latest to be declassified and presented to the public from a massive trove that was recovered from the compound in Abbottabad, Pakistan, where bin Laden was killed in a helicopter raid by U.S. Navy SEALs. U.S. intelligence officials said a final release from the bin Laden trove is expected to take place later this year.
The collection includes letters to subordinates in al-Qaeda, messages from followers willing to carry out suicide attacks, and screeds on issues including bin Laden’s conviction that the United States and Iran were poised for an apocalyptic war.
In one letter, bin Laden scolds one of his deputies for threatening attacks against Iran, saying, “As you are aware, Iran is our main artery for funds, personnel and communication.”
Members of bin Laden’s family were held in Iran for years in a murky state of house arrest, leading to speculation that al-Qaeda and Tehran had formed a wary partnership. But U.S. intelligence officials said they have found no evidence in the Abbottabad files of any formal arrangement along those lines. Other documents provide new details on the day-to-day existence for bin Laden in the walled Abbottabad compound and allude to the growing strain on the Pakistani brothers who served as his caretakers and couriers.
At one point, bin Laden writes to a colleague that the eight-year arrangement had taken such a toll on Abu Ahmed al-Kuwaiti that the courier’s health was deteriorating and that “it is a must that we find new companions to replace them because, for a long time, they were asking us to be released.”
He then goes on to write a job description, saying the task is mainly to “provide security cover” and make trips to the market. “We bake our own bread and the milk is delivered to the house,” he wrote, adding that the children at the compound did not go to the doctor “except .?.?. for broken bones.”
Bin Laden was increasingly anxious about security amid an escalating campaign of CIA drone strikes. He also frequently seemed clueless about how much his organization had been degraded, calling on deputies to mount operations and fill positions even as they pleaded that they lacked capable recruits.
Most of the messages are believed to have been drafted between 2009 and 2011. But some of the documents were handwritten and predate the attacks of Sept. 11, 2001. Among them is a will that officials said was probably written in the mid-1990s in Sudan, before bin Laden relocated to Afghanistan.
In scrawled Arabic writing, bin Laden says that he has $29 million in a bank account in Sudan, and he leaves detailed instructions that if he dies, he wants his followers to “spend all the money I have left” continuing the global terrorism campaign.
The sum was part of bin Laden’s share of a massive fortune his family built through contracts on construction projects for the Saudi royal family. U.S. officials said they do not know what became of the money in that Sudanese account.