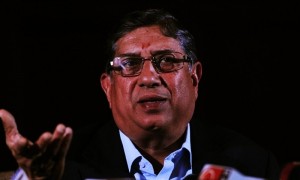 KOLKATA: A new book that takes a holistic look at cricket corruption has begun reaching bookstores on the eve of the World T20. And its author hopes to “rattle” the reader with its revelations.
Published by Harper Sports – a division of Harper Collins – the book “takes an overarching look at world cricket and various corruption issues”, says its author, journalist Shantanu Guha Ray.
“When it comes to finding a solution, we ought to remember that ICC refused to engage Interpol to clean up the game,” adds Guha Ray, currently India Editor, Central European News.“Like football, cricket has its fair share of illegal cash, but unlike what we have seen in football, there has been no serious effort at cleansing it.”Veteran journalist and author Shantanu Guha Ray at his New Delhi residence with a copy of ‘Fixed’, his book on cricket corruption. — Photo by Oindrilla Roy
Veteran journalist and author Shantanu Guha Ray at his New Delhi residence with a copy of ‘Fixed’, his book on cricket corruption. — Photo by Oindrilla Roy
As a result, the Delhi-based writer contends, “corruption will continue because the gravy trail is too big … I doubt there ever will be a total spring cleaning”.
This “gravy trail” is worth $150 billion worldwide, says Guha Ray, who as Deputy Business Editor of India Today magazine in 2011, scooped a multi-billion-dollar scam in India’s coal sector, popularly known as Coalgate.“There is a burgeoning market of punters and bookies across Asia and parts of Europe, South Africa and Canada which is into this business of illegal cash,” he tells this correspondent.
“And all those who are in it are rich. Then why are they in it? They are in it because unlike me or you, they need more cash, probably loads of them through the illegal route.”The book, titled ‘Fixed’, will be formally launched on April 8, as the World T20 ends and the Indian Premier League (IPL) begins. It is also available on Amazon.
But Guha Roy says that the timing is not a marketing ploy to tap into the heightened interest in the game because of the World T20, expected to garner a TV viewership of over 1.5 billion.“The launch timing has nothing to do with IPL or the World Cup,” he says. “This is the cricket season in India, and it made sense to launch it now.”
Grassing Tendulkar
The veteran journalist says ‘Fixed’ has “loads of interesting stories” ranging from those on Hansie Cronje and the late Pakistan coach Bob Woolmer to material on cricketers.
The stories include those which surfaced during the ICC World Cup in 2011, jointly hosted by India, Bangladesh and Sri Lanka.
“Text messages routinely predicted the results, the most bizarre being the India-Pakistan match in Mohali,” he says of the semi-final that Shahid Afridi’s team lost by 29 runs.
“When the Pakistanis were bowling, people had information about how the next over would go, over-by-over,” Guha Ray, who earlier worked for sports broadcaster ESPN, told this reporter over phone from Delhi.