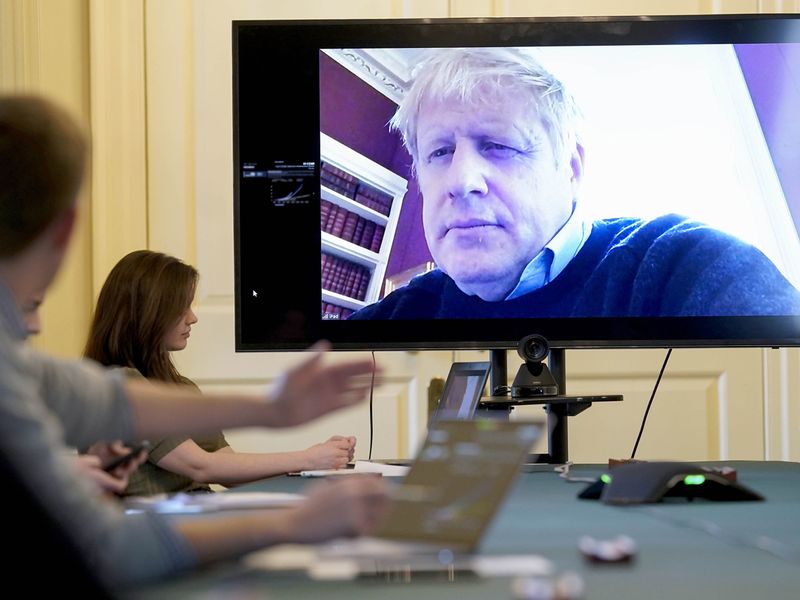 Last night, tens of millions of Brits in lockdown gathered around their television and laptop screens to watch an address from Queen Elizabeth II. It was only the fifth time in her 68 years as monarch that she has delivered such a special address. It was designed to provide reassurance to the nation.
“I want to thank everyone on the NHS [National Health Service] front line, as well as care workers and those carrying out essential roles, who selflessly continue their day-to-day duties outside the home in support of us all,” she said.
Minutes later, the country found out that those on the NHS front line were also caring for the prime minister, who had just been admitted to the hospital. Boris Johnson tested positive for coronavirus on March 27 and had been in self-isolation since.
So much for the reassurance. The head of state gave a serene address. But the head of government was in the hospital.
While government officials had previously said Johnson’s symptoms were “mild,” they have now dropped that word from their statements. The prime minister’s office did not deny that Johnson had been given oxygen, a medical intervention that normally suggests serious illness. (The British prime minister has been moved to the ICU now)

Shook hands with everyone

A month ago, Johnson enthusiastically told the press that he had visited a hospital with coronavirus patients and “shook hands with everybody,” though it is likely he contracted the virus later.
Johnson’s admission to the hospital comes at the worst possible moment. Epidemiologists expect that Britain’s outbreak is likely to peak in a week to 10 days.
The United Kingdom is currently on a path that mirrors Italy’s horrific death tolls, a harrowing prospect given that more than 700 people already died in Britain in a single day.
Because the British population is one-fifth the size of the United States, that’s akin to 3,500 Americans dying daily — with more than a week of increases to go before the peak arrives.
The government is now facing harsher criticism after the honeymoon period that saw strong approval ratings for Johnson’s response to the crisis. In late March, 72% of Brits said the prime minister was doing either “well” or “very well” in handling the crisis.
But now the government is under increased scrutiny as bodies mount, ventilator shortages loom and health-care workers are reporting shortages of personal protective equipment. Testing targets have repeatedly been missed. Messaging to the public has been confusing.
Still, even with a hospitalised prime minister and several sick senior government officials, the British government’s response has been far better than President Donald Trump’s callous and narcissistic incompetence.

British policy has been significantly more coordinated and decisive than Trump’s systematic downplaying of the threat and his clownish self-aggrandising reality-TV-style news conferences. (And yes, it’s a low bar to clear.)
Nonetheless, the spread of the coronavirus through Westminster shows how the pandemic can sap a government at exactly the moment when energetic leadership is required. In addition to the prime minister, Health Secretary Matt Hancock tested positive for the coronavirus. (He has now returned to work.)
The chief medical officer who is advising the government’s response, Chris Whitty, was forced into self-isolation after developing symptoms. Neil Ferguson, the author of the epidemiological modelling that prompted Johnson to institute a nationwide lockdown, has tested positive for the virus. And Dominic Cummings, Johnson’s controversial, Rasputin-like adviser, is in self-isolation after developing coronavirus-like symptoms.
The scale of the national emergency transcends politics. Partisanship doesn’t disappear — and rightly so — but everyone is rooting for the leader to do what is right and necessary to save lives.
In a country that has been as divided as ever over Brexit, everyone now wants the same thing: to reduce the number of people who die preventable deaths from the coronavirus. To accomplish that goal, Britain needs a leader — a healthy leader — to rise to the challenge.
But, as with Churchill, there are now whispers that Downing Street hasn’t being fully transparent. In 1953, Churchill suffered a stroke, a secret that was hidden from the public even though he was the sitting prime minister. He served for two more years before anyone found out.
Transparency in the coming hours and days is crucial. Brits will understand and accept a temporary transfer of power if it is necessary. They will not accept being lied to or deceived during the country’s most deadly period in modern history.
If Johnson is unable to fulfil his duties, his powers could temporarily pass to Dominic Raab, the first secretary of state and foreign secretary. So far, that decision has not been made.
And in the meantime, all we can do is hope for Johnson to make a speedy recovery, as a jittery nation confined at home heeds the queen’s words:
“We should take comfort that while we may have more still to endure, better days will return: We will be with our friends again; we will be with our families again; we will meet again.”

How Italy Snatched Health From the Jaws of Death