Web Desk December 27, 2015 News Comments Off on Waqar clarifies tweet to Brian Lara after being questioned on Twitter 190 Views

London, December: Pakistan cricket coach Waqar Younis was forced to clarify his tweet to former West Indian batsman Brian Lara on Friday after he referred to the latter as ‘BC’, which is considered as a derogatory term in the subcontinent, British media reported on Sunday.
“@BrianLara hope you and the family are well BC!”, Waqar tweeted in response of Xmas wishes.
It all started with the fast bowling great replying to a tweet from Lara, wishing his family and him well. At the end of Waqar’s tweet, he used the word ‘BC’, which caught the attention of the Twitterati.
Immediately, few cricket fans on the social media platform started questioning the tweet while others found it hilarious. Some even compared Waqar to Indian Test captain Virat Kohli, which is known to use a barrage of abuses during the course of play. 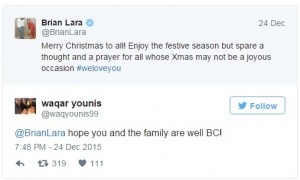 The 44-year-old didnt take long to explain to everyone he meant no offence and that BC was actually Lara’s nickname. The legendary West Indian’s name is Brian Charles and BC is merely an abbrevation of that.
“My dear friends, BC is Brian Charles Lara’s nickname..#Lara”, Waqar clarified.
Waqar and Lara are two of the greatest cricketers to have played the game. The former revolutionised the sport in the early 1990s with his brand of reverse swing, which he had learnt from Pakistan’s World Cup-winning captain Imran Khan.
The Vehari-born cricketer took 373 Test and 416 ODI wickets with an average of below 24 in both formats across a career that lasted 14 years. Along with Wasim Akram, he formed one of the greatest fast bowling pairs to have ever played the game.
Lara, on the other hand, retired with 11953 Test and 10405 ODI runs to his name. His 400 not out against England still remains the highest score ever made in a Test innings. – Online