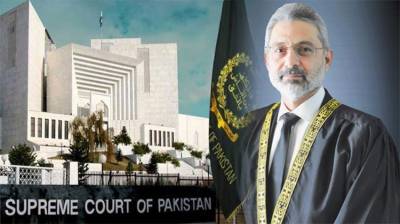 ISLAMABAD, June 19: The Supreme Court of Pakistan Friday rejected the Presidential reference against Justice Qazi Faez Isa for non-disclosure of family members’ properties in his wealth statement and also declared the show cause notice against him as null and void.
The short verdict was announced by Justice Umar Ata Bandial, leading the 10-judge full court bench.
The reference “is declared to be of no legal effect whatsoever and stands quashed, and in consequence thereof the proceedings pending in the Supreme Judicial Council against the Petitioner in CP 17/2019 (including the show-cause notice dated 17.07.2019 issued to him) stand abated”, the court’s short order read.
The other members of the 10-member larger bench were comprising Justices Maqbool Baqar, Manzoor Ahmad Malik, Faisal Arab, Mazhar Alam Khan Miankhel, Munib Akhtar, Sajjad Ali Shah, Syed Mansoor Ali Shah, Yahya Afridi, and Qazi Muhammad Amin Ahmed – heard the case, reserving the verdict before it was announced after 4pm.
The reference filed against Justice Isa by the government in May last year alleged that he acquired three properties in London on lease in the name of his wife and children between 2011 and 2015, but did not disclose them in his wealth returns. Justice Isa contested the allegation, saying he is not a beneficial owner of the flats – neither directly nor indirectly.
Through his petition, Justice Isa pleaded before the apex court to consider and declare that the Asset Recovery Unit (ARU) constituted by the government to investigate his family’s properties was illegal and working without any legal effect and any of the actions taken by the unit with regard to the reference against the petitioner judge and his family was thereby illegal and of no legal effect.
Earlier, the apex court reserved the verdict on the presidential reference against Justice Isa Friday. The court ordered the In-land Revenue commissioner to issue notices to Justice Isa’s wife and children for verification of the record of their properties. It asked the Federal Board of Revenue to decide on the matter and inform the court.
The apex court said the Supreme Judicial Council would be authorised to take any action, if required under the law. It asked the FBR chairperson to sign the report and submit it to the registrar. On June 2, 2019 the government confirmed that a presidential reference had been filed in the Supreme Judicial Council against the judge for owning foreign assets. Justice Isa has been accused of misconduct over failure to declare his wife and children’s UK properties. According to the judge, his wife and children have on their names three properties in the W2, E10 and E11 areas of London.
Justice Isa challenged the reference in the top court. He asked that the reference should be quashed and PM’s Assets Recovery Unit be termed null and void. He even asked for action to be taken against Special Assistant on Accountability Shahzad Akbar.
Sarina Isa, the wife of Justice Isa, revealed on Thursday the details of her London properties to the Supreme Court while recording her statement via a video link. She even submitted her money trail, tax records, bank documents and property papers to the court.
She revealed that she bought one property for £23,600 in 2004, another for £270,000, which is under her and her daughter’s name, and the third one for £245,000 in 2013. Her son lives in one of the properties and has put the other two on rent.
Justice Isa, who is in line to become the chief justice of Pakistan, has accused in a petition the PTI government of spying on him to discover his family’s properties. -DNA