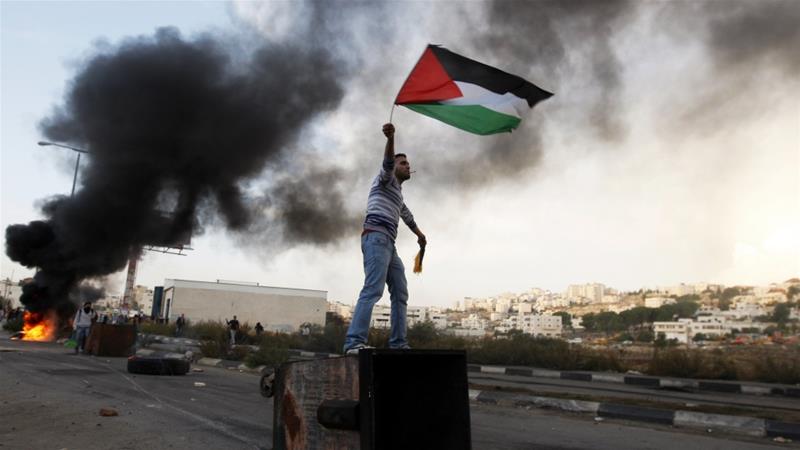 On May 25, 2020, George Floyd, a Black man, was murdered by Derek Chauvin, a white policeman in Minneapolis, Minnesota. Floyd’s murder was the latest in a normalised history of police abuse of Black, brown, Native American, immigrant and other marginalised communities, carried out with impunity and encouraged by the racist incitement of United States President Donald Trump and his white supremacist administration.
In response to the murder, people took to the streets against endemic police brutality, which enforces the systemic white supremacist subjugation of Black Americans. Solidarity protests were held across the world, including in the United Kingdom, Denmark, Brazil, New Zealand, Australia, Palestine, Greece, Germany and elsewhere.
As these spontaneous, grassroots protests were met with savage, occupation-style crackdowns by police – and as military forces and the mainstream media and political elites tried to smear protesters as “looters” and “thugs”, it was difficult not to draw parallels between this fight against anti-Black racism and the Palestinian struggle.
In fact, some important lessons can be drawn from the decades-old anti-colonial Palestinian struggle that could help ensure the success of the American uprising.

The white supremacist, settler colonial projects in the US and Israel share core tenets, oppressive tactics, aggressive strategies, propaganda techniques and apparatuses. As part of this cooperation, police officers in the US regularly train with their Israeli counterparts. In fact, the dangerous chokeholds used to murder George Floyd and before him, Eric Garner, are frequently inflicted on Palestinians by Israeli forces.
Joint training is complemented by an ideological cooperation between Israel and the US. Israeli media outlets, as well as liberal Zionists and major Zionist lobbies, have also participated in the smear campaign against the protests following George Floyd’s death, accusing them of anti-Semitism.
Zionist propagandists have claimed that the Black Lives Matter movement is being used in a political campaign against Israel, conflating principled anti-colonialist views expressed by anti-racism activists with anti-Semitism.
All this is happening within the context of the Trump administration’s efforts to further the relentless campaign against peaceful acts of resistance by the Palestinian people and their allies. It has officially declared a false equivalence between anti-Zionism and anti-Semitism and encouraged state-level campaigns to criminalise anti-Zionist, pro-Palestinian activism, including the Palestinian-led Boycott, Divestment and Sanctions (BDS) movement.
By equating Zionism and Judaism, President Donald Trump has not only served Israeli interests, but has also fuelled white supremacism and hurt civil liberties at home.
Trump has done so by scapegoating advocacy for Palestinian human rights on university campuses and attacking constitutionally protected freedoms such as the right to protest and boycott Israeli government speakers, investments and goods. Further, his policies have bolstered pro-Zionist efforts to force employees of US companies seeking cooperation with Israeli counterparts to sign pro-Israel, anti-BDS oaths as conditions of employment.
The equation of so-called religious with civil rights fits well with a goal of enacting a white supremacist patriarchal ethnostate supported by settler-colonial manifest destiny doctrine, and it may serve as a precedent for the repression of other anti-colonial movements such as Black Lives Matter.

In addition to the collaboration between explicitly reactionary forces in the US and Israel, the continued oppression of marginalised communities hinges on the liberal bourgeois class, a group of people Martin Luther King Jr referred to as “white moderates” in his letter from Birmingham Jail. Preaching the necessity of reforms, yet serving to undermine leftist revolutionary agendas under the guise of “practicality”, these complicit moderates afford valuable time and support for further entrenchment of oppression.
The ongoing racism, inequality and injustice in the US leading to the current uprisings demonstrate the inadequacy of liberal reformist approaches in improving the material conditions of marginalised people. Further, present strife highlights the dire need for a revolutionary socialist agenda to replace intrinsically white supremacist capitalist tyranny, to achieve permanent equality and justice.
In Palestine, the failure of the Oslo accords is a clear example of the price Palestinians have paid for reformist attempts. The Oslo accords were the culmination of dealmaking between liberal Zionists and a Palestinian leadership willing to settle for a nebulous version of autonomy with lofty, unmet promises, such as the “two-state solution”. The disastrous results of this compromise can be seen today: entrenchment of apartheid and expansion of Palestinian dispossession and oppression, with illegal, US-backed annexation on the horizon.
Further, liberals in the US and their liberal Zionist analogues in Israel serve as propagandists for white supremacy in the US and Israel, providing a “modern”, “tolerant” and “diverse” facade for a fundamentally racist system.
Liberals persistently shift the discussion away from a systemic analysis of the state’s daily displays of violence to a focus on isolated events and perceived civility of revolutionary tactics, conditioning their allyship on commitments to non-violence and respect for state representations and commodities.
Protests falling for this trap are quickly co-opted by liberals and their associated politicians with pie-in-the-sky promises of reform, resulting in net losses for the left. When acts of resistance are limited to non-violent displays, while the far more substantial and pervasive systemic violence is ignored and excused, retaliatory and often defensive acts at the hands of protesters are vilified, resulting in dangerous reactionary precedents.

The Zionist ‘left’ and BDS

On June 6, thousands of people took to the streets of Tel Aviv to protest against the Netanyahu government’s plans for annexation of parts of the West Bank. Speakers included the head of the Joint List, Ayman Odeh, the Chairman of the liberal Zionist Meretz party, Nitzan Horowitz, and a special video appearance by US Senator Bernie Sanders.
Although the protest consisted of a broad coalition, including anti-Zionist groups, the inclusion of liberal reformists inevitably doomed any sort of efforts to stall or thwart counter-revolutionary efforts. On the contrary, such displays serve to deflate any revolutionary momentum into a collective vent for frustrations.
The Zionist “left” is an integral part of the oppressive Zionist propaganda apparatus, whether those involved in the endeavour are aware of it or not. The supposed left, “liberal” wing of Zionism, comprising Israeli political parties, non-profit organisations and media organs in Israel and outside it, serves to promote Zionist propaganda, which renders occupation, apartheid and the genocide of the Indigenous Palestinian people palatable to audiences in Israel and worldwide. The Palestinian liberal bourgeoisie, especially those within the Green Line, tend to fall for this mirage time and again.
By contrast, the BDS movement has wisely adopted a strict anti-Zionist, anti-racist platform. A resistance to oppression through the formation of intersectional alliances built on a clear understanding of systems of oppression incorporates lessons of past anti-colonial movements and breaks apart the fictitious, divisive political narratives of white supremacy, imperialism, racism and patriarchy.
The recognition that various oppressed peoples have common enemies serves to reinforce solidarity and cooperation between them and assists in principled grassroots movements, such as BDS and Black Lives Matter.
The anti-Zionist, anti-racist framework intrinsic to the BDS movement has yielded far more impressive gains for Palestinians than any collaboration with white saviours and/or liberal Zionist entities.
Leaders of the current uprisings in the US can engage in a fruitful exchange of knowledge with the Palestinian resistance, in line with past efforts of groups such as the Black Panther Party. Adhering to revolutionary principles while refraining from alliances with counter-revolutionaries can deliver a chance to abolish capitalist racist oppression.