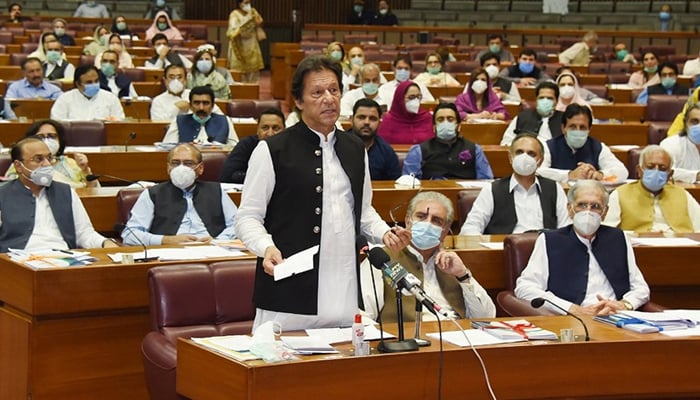 ISLAMABAD, June 30: Prime Minister Imran Khan said on Tuesday that the Pakistan Stock Exchange attack in Karachi was perpetrated by India in order to destablise Pakistan.
The prime minister was addressing the National Assembly, where he lauded the security forces for thwarting the attack, which could have otherwise caused considerable destruction.
“We have no doubt that India is involved in the attack,” the prime minister told the lower House of the parliament in his speech.
The prime minister paid respect to the martyrs of the attack, which included a policeman and two security guards of the stock exchange.
In the yesterday’s attack on the stock exchange in financial hub of the country, security forces killed four terrorists in retaliatory response.
Speaking regarding the recently-passed budget, the premier said that the COVID-19 has affected economies around the world and the federal budget this year turned out to be quite an uphill task for the government.
“We had to accumulate Rs5,000 billion initially but because of the virus our accumulation dropped down to Rs3,000 billion,” he told the NA.
The prime minister added that the government could not incur the losses caused by the ‘unprecedented’ pandemic.
The PM said that despite the criticism, the government reopened the construction sector and imposed ‘smart’ lockdown in areas with surge in virus cases.
“We were not the ones suffering from confusion but those who are not familiar with the woes of poor,” he said.
He said that the future of the country lies in industrialisation, adding that the desired results for economy cannot be obtained until ‘cartels such as sugar mill mafia’ keep on reaping profits through illicit means.
PM Imran said that the regulators and Federal Bureau of Revenue have a duty to keep things in check but they are also complicit in these matters.
“It is our duty to rein in this mafia under the law,” he told the lawmakers at the NA. -DNA