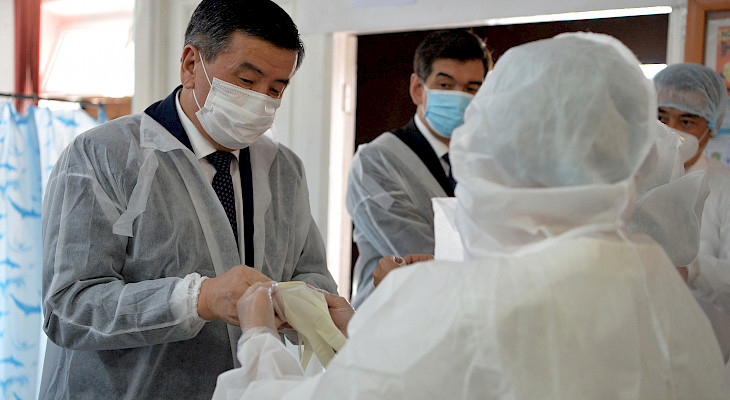 Kyrgyz President Sooronbay Jeenbekov visited a daytime inpatient center in the city of Bishkek, which was opened to provide primary medical care to citizens, his press service reported.
For today four similar centers are operating in the capital, five more are being opened. Citizens can apply for consultations and primary medical care here.
Munarkan Omuraliyeva, Director of the United Family Medicine Centre of Pervomay District of Bishkek told about the whole procedure of receiving citizens, rendering them primary assistance.
She said a pharmacy is functioning in the hospital for the convenience of patients. Omuraliyeva noted all the gaps that occurred at the beginning of the daytime hospitals’ work have been studied, and expressed confidence that the disease will soon be defeated.
The director informed that doctors in the hospitals are provided with everything necessary, including personal protective equipment.
In conversation with the medical personnel, the President noted the timely opening of the hospitals in the capital, as the day before the citizens, left without attention, were alarmed by the lack of consultations and first medical aid.