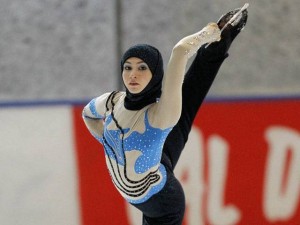 Professional figure skater Zahra Lari represents the United Arab Emirates and has a big dream.
The 21-year-old from Abu Dhabi has represented her country in international competitions held in Slovakia, Hungary, and Italy, among others.
Lari now has her heart set on the 2018 Winter Olympics in PyeongChang, South Korea.
In 2013, the UAE became part of the International Skating Union, paving the way for Lari to participate in major international competitions. If she makes it to the Winter Olympics, she’ll be making history for her country.
Inspired by the Disney film Ice Princess, Lari started skating on a whim when she was about 12 years old.
“When I first stepped onto the ice, I fell,” she told The Huffington Post. “I knew I just needed to figure out how to get back up and keep trying. So that’s what I did. Fall after fall, I kept getting back up.”
However, undeterred by the falls, Lari was hooked to the sport. What started as an after-school hobby blossomed into an intense passion for the sport.
By 2015, she was training between four to seven hours a day, balancing her time on the ice with schoolwork at the Abu Dhabi University.
While her parents were initially hesitant about her skating, worried she would injure herself or her academics would suffer, they began supporting her fully after they realised how passionate she was about the sport.
“There was a period when my dad wanted me to stop because he said I was getting too serious and he felt I had reached the age that I needed to stop,” Lari said. “He always did so with love and kindness.”
“When there was a national competition, he refused to allow me to participate,” she said. “But in all fairness, he took me to watch and cheer for my fellow teammates. When he saw how happy I was for them but sad for myself, he allowed me to continue. That was when he finally understood me and how much I truly loved this sport.” – Agencies