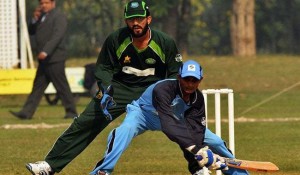 KARACHI:  India blind cricket team overpowered their counterparts from Pakistan by 45 runs in the summit clash of Asia Cup T-20 Cricket of the Blind to claim the title at Jawaharlal Nehru International Stadium in Kochi (India) on Sunday. According to the information made available here, India won the toss and decided to bat first. India posted a competitive total of 208 runs on board in stipulated 20 overs for the loss of five wickets. Deepak Patel was the top scorer with 40 runs whereas Ketan Patel made 34 runs. Haroon Khan and Sajid Nawaz bagged a wicket each.  Pakistan in reply started badly. Opener Haroon Khan lofted the ball and was caught on the second ball of the inning without scoring a single run. Zahid Mehmood was also bowled in the second over. He made only four runs.  Nisar Ali was dismissed for one run. Muhammad Akram was also bowled on the very first ball he faced. Pakistan lost the first four wickets for just 40 runs on board inside first four overs.  Amir Ishfaq scored some quick runs but he was run out after scoring 38 runs off 21 balls. Anees Javed and Israr Hassan tried to build the innings and took the score to 113 runs after 11 overs, but again wickets fell in succession as Pakistan was bowled out for 163 runs in 18.2 overs. Anees Javed was the top scorer with 43 runs. Deepak took two wickets for the champions.  – PPI