Washington did not dispel ASEAN’s doubts

Previous govt did not provide any relief to the people in the last three-and-a-half years: PM 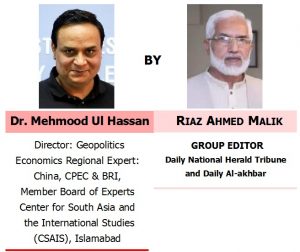 The genie of Western fake, false and fictional propaganda against China has once again come out from the old bottle. The Chinese government is now busy in preparation of Beijing Winter Olympics which will be started on February 4, 2022 and the Western political jugglers have once again started circus to defame China and its numerous national policies and integrated measures to maintain law and order and stability.
In modern civilization the concept of national security is sacred and supreme. Western perpetuated colonization and Chinese ancient philosophy of shared prosperity have been portraying two different schools of taught and civil orientations. Thus forces of propaganda and prosperity has been at eye-ball-to-eye 2 and Western sponsored schemes against Chinese development is now at flee and they do not have moral grounds or economic strength to compete China. Thus has again started series of propagandas.
In addition to this most recently, the European Parliament (EP) has adopted a new resolution on Hong Kong, advocating tough measures be taken over the government’s crackdown on the city’s press freedom.
The 28-point resolution passed with broad support in the plenary session in Strasbourg, with 578 members of Parliament voting to adopt it and 29 voting against it; 73 abstained.
Frankly speaking, the measures are not binding, but are a set of recommendations to the European Commission (EC) and the Council of the European Union (CEU) based on the prevalent mood in the Parliament. But it has one thing common which comprising of fake news dissemination.
The law makers called for both the EU institutions and its 27 member states to decline invitations to attend the Beijing Winter Olympics “unless the Chinese government demonstrates a verifiable improvement” in its human rights record. Thus clearly shows its ill intentions and biased attitude towards China and its people alike.
However, this seems unlikely to gain unanimous support across the EU. The Greek Prime Minister Kyriakos Mitsotakis accepted an invitation from Chinese leader Xi Jinping to attend the Games.
The Chinese mission to the EU termed the resolution as “a blatant violation of basic norms governing international relations and the spirit of rule of law and a gross interference in China’s internal affairs thus strongly rejected the said notion.
On its part, China firmly opposes the politicisation of sports. Politically driven attempts to disrupt, obstruct and sabotage the preparation and holding of the Beijing Winter Olympics are extremely irresponsible.
Unfortunately, while addressing the debate on behalf of the European Commission, commissioner for financial stability Mairead McGuinness described the national security law as “draconian and urged an intensified response through increasing support to civil society, including those outside Hong Kong and the media, promoting freedom of expression, facilitating mobility, as well as ensuring observation of the trials of pro-democracy activists.
The EP adopted a so-called Hong Kong-related resolution, pointing a finger at Hong Kong affairs, discrediting China wantonly, calling for sanctions on officials from the Chinese central government and Hong Kong Special Administrative Region (HKSAR) government, and even arrogantly urging China to abolish the national security law for Hong Kong. It also asked the EU to boycott the Beijing 2022 Winter Olympics.
The Liaison Office of the Central People’s Government in the Hong Kong Special Administrative Region (HKSAR) has firmly rejected and strongly condemned the so-called Hong Kong-related resolution of the European Parliament. It condemned the resolution for smearing “one country, two systems,” wantonly interfering in China’s internal affairs. It labeled it as violation of international law and the basic norms governing international relations.
According to spokesperson any external forces interfering in Hong Kong affairs and repeatedly staging such self-deceiving political farces are doomed to failure. It seems that the EP once again judged others’ democracy with condensation and interfered in China’s internal affairs including Hong Kong affairs, which is unacceptable.
The spokesperson stressed that the development of China-EU cooperation is an overwhelming trend, and the prosperity and stability of Hong Kong bear on the interests of more than 2,300 EU enterprises and 350,000 EU citizens in Hong Kong. In this context, he urged that some European politicians to grasp the situation, respect the facts, and not to lift the stone only to drop it on their own feet.