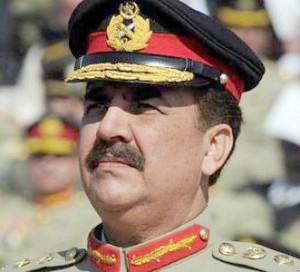 RAWALPINDI, January 25: Director General ISPR Lieutenant General Asim Saleem Bajwa in twitter messages on Monday said speculations about extension in COAS General Raheel Sharif’s job are baseless. According to DG ISPR, Army Chief has said efforts to root out terrorism will continue with full vigor and resolve. COAS said “Pakistan Army is a great institution. I do not believe in extension and will retire on the due date”. He said Pakistan’s national interest is supreme and will be safeguarded at all costs.
General Raheel Sharif is the 15th Chief of Army Staff who was appointed on November 27, 2013 by Prime Minister Mian Muhammad Nawaz Sharif. The Army Chief is scheduled for retirement in November 2016.
The Chief of Army Staff has been lauded across the board for launching a massive operation called Zarb-e-Azb against militants. The operation was launched in June 2014, killing around 3,500 terrorists so far and has destroyed nearly 1,000 hideouts. Around 30,000 army personnel are taking part in the large-scale operation.
On the other hand, in the early hours on Monday a plea was filed in the Supreme Court of Pakistan seeking extension in the COAS’s service tenure. Applicant Mehmood Akhtar Naqvi has stated that Zarb-e-Azb, the operation which has been hailed as bone-breaker of terror outfits is continuing successfully under Army Chief’s leadership. The petitioner has maintained that General Raheel Sharif’s service tenure is needed to be extended for elimination of extremism from the country. Naqvi stated that situation in Karachi is also moving towards betterment. During the tenure of General Raheel Sharif as Army Chief, terror attacks have lessened across the country, plea states. The petitioner has requested the court to hear the case on January 29. The plea mentions federation, President Mamnoon Hussain and Prime Minister Nawaz Sharif as parties.-Sabah