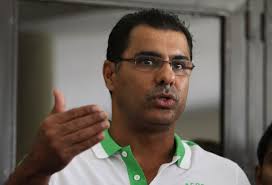 New Delhi: Pakistan cricket team coach Waqar Younis has termed Mohammad Amir as a world class bowler and that he is an inspiration for young fast bowlers.Amir bowled his heart out and picked three quick wickets to deflate the Indian batting upfront in the ongoing Asia Cup. Although Pakistan lost the match by five wickets, Amir’s performance was the key.It was one heck of a spell by the bowler who has made a return to cricket after a gap of five years.
“He (Amir) is definitely world class and is getting better and stronger with every match. Even Virat Kohli has acknowledged that he is world class. He is an inspiration for young fast bowlers. Today the length at which he especially bowled and swung the ball at that pace was simply outstanding,” Waqar said.The youngster was praised by Virat Kohli on Saturday after India’s victory against Pakistan. And alongside Waqar, even Indian skipper Mahendra Singh Dhoni conceded that Amir’s length was the key.
“It was a great spell by Amir. His advantage was he bowled full. In this Pakistan team Amir and Mohammed Sami are the two bowlers who bowl a fuller length while the other two (Mohammed Irfan and Wahab Riaz) don’t bowl too full and also don’t swing much. But with quota of only four overs, captain is also under so much pressure,” Dhoni said.
Amir, who was banned from cricket for five years for his alleged role in spot-fixing in 2010, made a return to the Pakistan team earlier this year in the series against New Zealand.