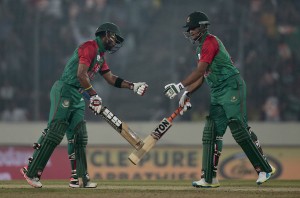 Bangladesh registered a 23-run upset victory over defending champions Sri Lanka in a round robin league encounter to keep their hopes alive of qualifying for the final of Asia Cup T20 cricket tournament here today.
Batting first, Sabbir Rahaman’s 54-ball-80 helped the home team reach a competitive 147 for seven in 20 overs.
In reply, Sri Lanka looked like chasing the target easily till the first 10 overs but suffered a dramatic batting collapse as they could only score 124 for eight in the end. Mustafizur Rahaman (1/19 in 4 overs) again bowled brilliantly at the death using all the variations in his armoury to help his team notch up their second win in the tournament.
Skipper Mashrafe Mortaza kept three overs of his best bowler at the back end which proved to be really useful.
Spinners Shakib Al Hasan (2/21 in 4 overs) and Mahmudullah Riyadh (1/14 in 2 overs) complemented Mustafizur well as their six overs produced only 35 runs and also got them three wickets.
The loss of four wickets for 16 runs in between the end of 11th and 15th over was the turning point for the ‘Tigers’, as the home team is fondly referred to in this part of the world.
Soumya Sarkar took a lovely catch running backwards from his mid-off position to dismiss Tillekaratne Dilshan (12). Dinesh Chandimal (37) and Shehan Jayasuriya (26) added 56 runs for the second wicket as Sri Lanka were cruising along at 76 for one as the 11th over was coming to an end.
But then, Chandimal played an ugly reverse slog pull which landed in the safe hands of Taskin Ahmed stationed at deep point. Jayasuriya was then stumped off Shakib Al Hasan’s bowling as Sri Lanka suddenly slumped to 78 for three.
It soon became 85 for four when Thisara Perera (4) failed to capitalise on the dropped catch by Taskin as Mustafizur bowled in the blockhole to trap him leg before. The ball slanted with the angle and no footwork caught the left-hander in the crease.

We had no idea about the conditions in Dhaka: Malik

We had no idea about the conditions in Dhaka: Malik